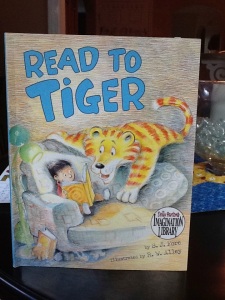 A boy is trying to read a book, but a tiger keeps interrupting him with chomping gum, playing trains, and pretending to be a bear. Neither one will be happy until they find a solution that works for both of them.

This a simple story (we never find out the boy’s name, but it doesn’t matter). The boy tries to get Tiger to stop over and over until they decide to read the tiger book (!) together. I wonder what would have happened if the book the boy was reading was about something else?

What Did My Kids Think?

My son has transitioned to chapter books that he reads himself (he loves, loves, loves Geronimo Stilton) and my daughter can’t get enough of picture books, so I thought I’d start listing what they both thought. My son saw the parallel between this book and how he reads to his stuffed puppy sometimes (who he pretends is alive sometimes, too). My daughter liked the illustrations, and the look on the tiger’s face (with is very innocent and inquisitive, not threatening at all). This story also reminds me of when my daughter is bugging my son while he is reading alone, so he decides to read to her instead.

Activity: The tiger uses lots of sounds when he plays- choo choo, chomp chomp, grrrr. Brainstorm other sounds. Then try to guess what tiger (or a child) might be doing if they were making that sound.

5 thoughts on “Review: Read to Tiger”

What Katie is Reading…